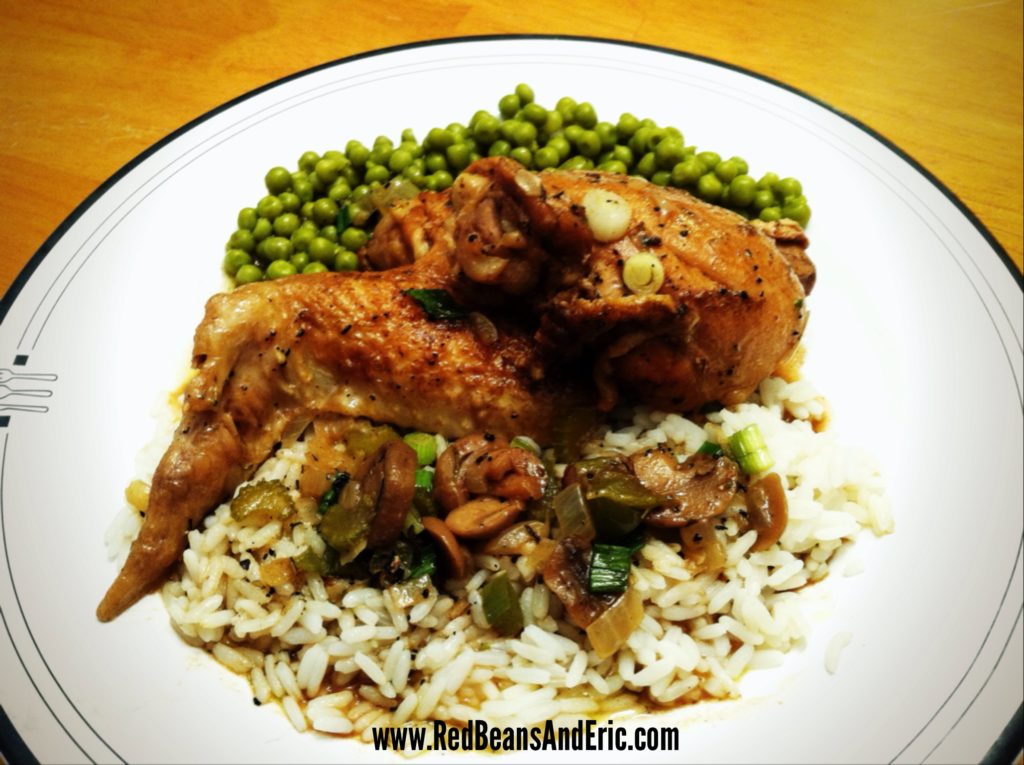 Can you even order Stewed Chicken in New Orleans? While doing some online research, it’s impossible to find a restaurant that serves this amazing chicken dinner.

If you’re not familiar with New Orleans style Stewed Chicken, Tom Fitzmorris, a New Orleans food writer, described it perfectly by saying that it’s “sort of like a chicken gumbo but with bigger pieces of chicken and less broth.” Fitzmorris also tells that stewed chicken is a lost lunchtime favorite throughout the Crescent City. He says that “unfortunately, it’s slipping away from us.”

I was curious if the meal was actually slipping away from everyone.

I did an unscientific poll on Facebook asking if anyone still makes the chicken meal at home since restaurants don’t seem to be making it. The recipe is not in many cookbooks. In fact, the only cookbook that I have that has stewed chicken is Fitzmorris’s New Orleans Food Cookbook – so I wasn’t expecting much of a response.

Overwhelmingly people came to the defense of Stewed Chicken! Some say they make it every other week, others say it’s their most requested meal to make! I believe it. 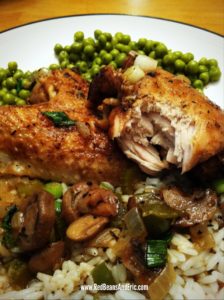 There is a similar version of Stewed Chicken that more people probably have heard of: Chicken Fricassee. This French comfort food is a one-pot dish of chicken braised and sautéed with vegetables in a rich, silky light-colored sauce. And with the huge influence on the food and culture of New Orleans from the early years of France controlling New Orleans, this dish made its way into the kitchen of restaurants and homes and then altered throughout the years by the Creole cooks.

It might be a lost dinner or lunch at a restaurant in New Orleans, but it’s still on the home cooks menu. When you make this recipe, you’ll understand what Fitzmorris was saying about it tasting like a gumbo. And like a gumbo, the amazing smells linger in the house for hours. The aroma of bacon as the fat heats up, the chicken sautéing, the familiar smell of a roux. This dinner triggers plenty of cravings. The smells are not the only part that lingers around, there’s also the flavors that hit the taste buds. The brown gravy and fall-off-the-bone chicken is something special.

Have you found Stewed Chicken at a restaurant in New Orleans? If so, please share that in the comment section below. If you’ve made this recipe, tell us what you thought about it in the comments. I’d love to hear from you! If you enjoyed this recipe, please subscribe to the Red Beans & Eric Newsletter so you don’t miss another recipe, interview, or review. I’ll send you a free e-cookbook that includes some of the most popular recipes found here on the website.

You can always stay in touch with me by leaving a comment in the section below, by clicking here or messaging me on any of the social media sites that I am on. Don’t forget to tag me so I can see what you made.