You are here: Home / Gumbo/Soups/Stews / Chicken and Sausage with Okra Gumbo 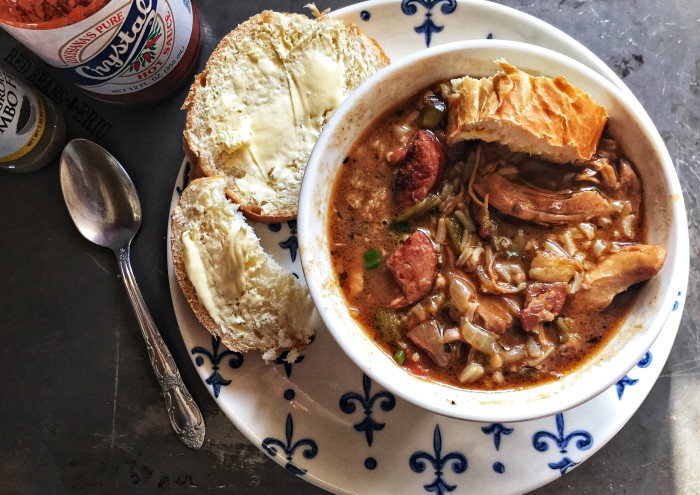 The Motor City has seen more ‘less than 20 degree’ days than it has ever seen – or felt – before. This extreme cold had even brought us a record 12 consecutive days under 20 at the beginning of January with most of those days being below 10 degrees. It was brutal for sure. Schools were even canceled one day when it was below zero with a high wind chill.

Then it seems like everyday New Orleans is frozen over. Everyone’s having a winter blast with all of the memes being shared across social media. It’s something else seeing photographs of a frozen over Jackson Square or the second line statues at Armstrong Park covered in ice. This is what I’ve been seeing about New Orleans the past week or two: 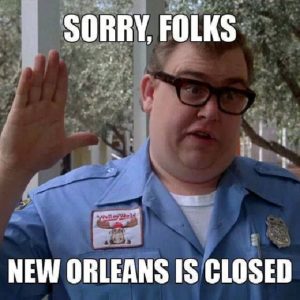 With the prolonged cold spell – at least in the south which hasn’t seen record colds like this in over 20 years – means a prolonged gumbo and soup season. Up here in the north, it can be cold and snowy through March, so we can cycle through quite a few soup and chili recipes before all is said and done.

My soup season usually consists of plenty of chicken noodle soup, various chilis, tomato soup with grilled cheese sandwiches, and the occasional Hot Red Pepper Soup with Creole Croutons (you can find that recipe by clicking here). And of course, there are those days when the only thing that can warm me up is a gumbo.

This is one of my favorite meals to make. I love the way the house smells while the roux cooks and when the trinity is added. Plus, there’s bacon. I usually put about three slices of chopped bacon into the recipe but I sometimes cook extra just so I can snack on a piece or two. Then there’s the beer. It’s not in the recipe because it doesn’t go into the gumbo but it pairs well with the roux-making process – it’s not required but is a nice added bonus for the cook.

So, while it’s cold and miserable and you’re stuck indoors, make a gumbo. Hopefully, it’ll warm up a bit by Mardi Gras. Y’all want to be singing Mardi Gras songs about Brother John, not Brother Long-Johns. According to the National Weather Service, the coldest it has ever been for Mardi Gras was 39 degrees recorded on February 14, 1899. Perhaps Mother Nature will have a huge mood swing and it’ll be the warmest ever! Which, if you remember, was last year. It was a mere 83 degrees.

What’s your favorite gumbo or soup recipe that keeps you warm in these frigid days? Let us know in the comment section below. Here’s mine: 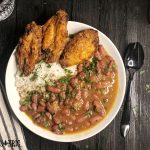