On a Wednesday night at the Jazz Playhouse inside of the Royal Sonesta, you’d find Big Sam Williams and his band, Big Sam’s Funky Nation, grooving it out to a packed house. The award-winning band’s unique New Orleans funk style has been the beating heart of the local music scene for years.

And it almost never happened.

While in middle school, Williams was not allowed to join the basketball team because of the big size difference he had from his classmates. So, instead of sports, he turned to music. Since marching bands are extremely popular in New Orleans, he decided to join the band. The band director asked him what he wanted to play. Since no one else wanted to learn the trombone, Williams picked that instrument.

In high school, Williams realized that playing the trombone was what he wanted to do with the rest of his life. During those years, and while enrolled in the New Orleans Center for Creative Arts (NOCCA), his mother bought him a Dirty Dozen Brass Band CD and he immediately fell in love with the sound – even promising himself one day that he was going to play for that band.

Four years later, at the age of 19, he was. After high school, and while playing with the Stooges Brass Band, he had the opportunity to play for the Dirty Dozen Brass Band and jumped at the chance. He toured with the DDBB for about a year and played with James Brown, The Dave Matthews Band, Widespread Panic, and more.

In 2006, he found himself as the lead trombone player for Elvis Costello and Allen Toussaint on the Grammy-nominated album, ‘The River in Reverse‘, and the tour that followed the release.

But it was grueling being on the road for over 300 days a year and Williams decided to turn his full attention on his own band, Big Sam’s Funky Nation. The band has gone on to win numerous awards around New Orleans for the ‘Best Funk/R&B band‘ in various reader polls, and in 2016 was awarded the ‘Best New Orleans Band‘ by Where Y’at magazine.

You can also find Williams in a reoccurring role in the critically acclaimed HBO series Treme. It’s not widely known, but actor Wendell Pierces’ character, Antoine Batiste, is modeled after Big Sam with the look he had at that time.

You’ll still find Big Sam with his Kangol hat and the Funky Nation grooving to their funk, rock, brass band, jazz, and dance style throughout New Orleans. Over 15-years later, they are still stronger than ever and one of the most sought after music groups to see in New Orleans. In May of 2020, they released the single No More Shakes, and are working on a new full-length album.

It’s always a party when Big Sam Williams is around and you know it’s about to get funky.

My grandma, wife, and mother in law! The BEST!

I learned how to make red beans and rice from my mom when I was 13 years old. She’s no longer with us, so that’s why I can’t say that hers is the best, but my grandma taught her, so that also explains why mine is so good!

It means it’s Monday and it’s about to get Funky!

Yea… Pre-Katrina, Donna’s bar and grill on Rampart used to have Free Red Beans and Rice on Monday nights. You would have cats like Bob French performing and the whole night was just a vibe.

Nah… I eat it whenever! As long as it’s looking and smelling good, I’m eating it! #bigsamcaneat

Did you have any projects that you’d like to pass along?

Yea… I released a single called “No More Shakes” back in May. I’m also working on a new album as we speak, so be on the lookout for it.

To stay up-to-date on Sam Williams and Big Sam’s Funky Nation, you can follow him on any of the following social media links below. If you’re in New Orleans, make sure you find out where he is playing at. He’s one of New Orleans music treasures and a great person. 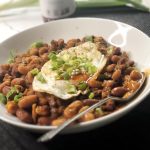