The word ‘griot‘ (gree-oh) comes from West African tribes and is a member of a group of traveling poets, musicians, or storytellers who maintain a tradition of oral history. They entertain with stories, poems, songs, and dance. A teacher of sorts.

Raymond Williams was born and raised in New Orleans. He started playing the trumpet at an early age after hearing neighbors playing while in his backyard. His grandfather showed him how to get a sound. His school bands, brass bands and studying under Ellis Marsalis at the New Orleans Center of Creative Arts helped him carry on the “proud New Orleans trumpet heritage.”

So many kids want to grow up to be the next Louis Armstrong in NOLA. Williams was no different. But to get to the next level he knew he had to leave his hometown. He moved to Hartford, Connecticut to study with jazz great Jackie McLean at the HARTT School of Music. Raymond began to flourish in New England and became one of the areas most in-demand trumpet players.

He became so good playing that his teacher and mentor, McLean, who gave Williams the nickname “Dr. Rackle”, asked him to be a member of his own band, the Jackie McLean Sextet. In 1997, Raymond recorded with McLean on his album Fire and Love. During that time, Williams talked about starting his own band. McLean suggested that the name of the band should be “Dr. Rackle And The Sound Griots”. Williams agreed and the band was born.

For a few years, Dr. Rackle and the Sound Griots toured around Connecticut until Williams moved back to New Orleans in 2000. He started another version of the band in 2001 and played shows all over New Orleans. After Hurricane Katrina hit in 2005, he put the Sound Griots on the back burner and concentrated on working with another band, the Hot 8 Brass Band.

2014 was a big year in the history of the Hot 8, they were nominated for a Grammy Award for the album “The Life and Times of the Hot 8 Brass Band.” The album includes another one of Williams’s songs, “Fine Tuner.” The catchy lyrics sing about jamming “to the music of Dr. Rackle.” (Click on the link to see a YouTube video of the Hot 8 second-lining while playing the song.)

And just like a griot, Williams and the Hot 8 Brass Band tell stories of life on the streets in New Orleans. They all have gone through tough times and they sing about it, write music about it and travel the world telling everyone about it. At each stop outside of NOLA, they’re teaching others about the New Orleans culture. While in NOLA, they are contributing to the culture by playing in the traditional Second Line parades, helping the community through music and interaction, and with redevelopment and recovery efforts of areas in the city still affected by Hurricane Katrina.

Besides hearing Dr. Rackle, you can also see him in the feature film Ray, with Jamie Foxx as a member of Ray Charles’ band, he’s also appeared in the Spike Lee documentary When the Levees Broke and the second season of the HBO series Treme.

I had the chance to ask the multi-talented trumpeter, composer, arranger, and educator, Dr. Rackle, ‘How Do You Red Bean?’

1. Where’s your favorite place to order red beans and rice?

I never order out because most beans have pork in it. I don’t eat pork. I used to order vegetarian style red beans from a restaurant on Esplanade a while back but they are close now. I forgot the name.

2. How do you make your red beans?

3. What do you eat with your red beans?

4. Do you only eat your red beans Monday?

Mostly on Mondays, but the leftovers are good any day.

For more information on Raymond ‘Dr Rackle’ Williams, tour information, and a sampling of his music, please visit www.drrackleandthesoundgriots.com. 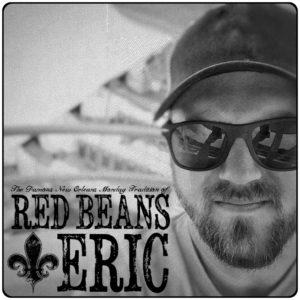 A Proud Member of: