She finds the finest recipes for that books theme from restaurant kitchens and professional chefs around New Orleans. Wohl then tests each and every recipe and adapts them for the home-cook along with photographing each dish for the cookbook.

Gourmet Magazine chose New Orleans Classic: Gumbos and Soups as the magazine’s ‘Cookbook of the Month‘ for February 2009. With the ‘Classic‘ series, Wohl wanted to “assure everyone that the cuisine of New Orleans was still very much alive.”  The collection of books not only shows how unique and alive the cuisine is, but also shows how special New Orleans is.

Wohl has also written cookbooks for the P&J Oyster Company, Arnaud’s Restaurant, and The James Beard Foundation’s Best of the Best: A 25th Anniversary Celebration of America’s Outstanding Chefs which has a foreword by Martha Stewart. The P&J Oyster Company Cookbook was named ‘Cookbook of the Year’ by New Orleans Magazine in 2010.

My own kitchen, and Popeye’s. I ask for red beans with no rice, and order their dirty rice side, then combine the two.

I love Blue Runner canned beans when we’re on the go. It’s always in the pantry, and the sausage is always in the freezer. Simply brown the sausage and sauté onion and garlic in the sausage oil. Add the red beans. Then, stir in a little chicken or beef stock if it’s too thick. I’d say water, but what kind of flavor does water bring to the party?

I also cook the rice in chicken stock. The unique ingredients are about a 1/2 cup of cheddar cheese and a teaspoon of Liquid Smoke, an old Warren LeRuth trick.

We have them anytime the mood stirs us.

For the latest information on the award winning author, Kit Wohl, be sure to follow her on Twitter @kitwohl.

This interview was originally published on October 27, 2014. Photo credit: MyNewOrleans.com. 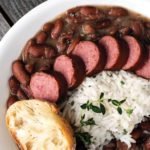