9 times out of ten, when I make grilled cheese sandwiches for the family, tomato soup is served. That tenth time, that one soup I pick to throw everyone off: Hot Red Pepper Soup is the culprit.

The two soups look fairly similar. Red. The main difference when I do make this red pepper soup is that I always serve Creole Crouton with it. The crunchy spicy cubes of stale bread add that extra depth of flavor that gives this already hot and spicy soup an extra kick – which is perfect during soup season. 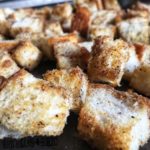 This is also a handy recipe for those of you with a green thumb and can grow red bell peppers during the summer months. Bell peppers are at their peak from July through September. Though most people that I know that do grow bell peppers seem to always make a homemade salsa with them; but this time, save a few peppers for this soup. It’s a great summer soup and can be served with a good green salad for a light lunch.

Plus, there are so many health benefits of having bell peppers – especially a fully ripened red bell pepper. An RBP contains more than 200 percent of your daily vitamin C intake. They have minerals that can prevent anemia. They are high in iron. The vitamin A within the red bell pepper helps with having healthy vision. The antioxidants, which make this vegetable a superfood, can help prevent many cancers. And, a red bell pepper can increase your metabolism to help you burn more calories.

The most difficult part in preparing this soup, for me at least, is adding that dollop of sour cream at the end. I cannot figure out how to get that swirl look; that design that baristas get in the fancy coffee shops or the food stylists get in the magazines. My wife laughs every time with a ‘Pinterest fail‘ comment.

This soup is definitely not a fail. It’s a grilled cheese dunkable soup. It’s a great addition to the cold weather soup rotation to bring in a bit of variety. It’s on the menu for a healthy lunch option in the summer months. And it’s fun to see my wife’s reaction when I don’t tell her what it is and she’s expecting Tomato Soup. I don’t get that too often – just one time out of ten.

Is Hot Red Pepper Soup in your soup rotation? Let us know what you think of this soup in the comment section below! 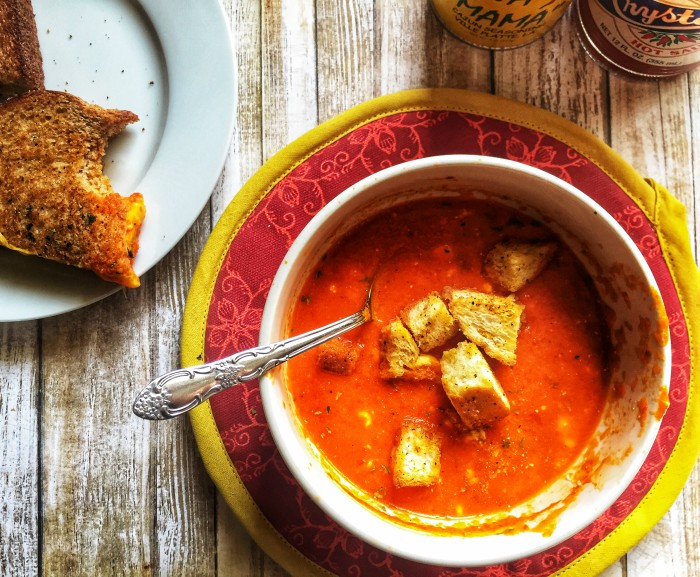 If you enjoyed this recipe, please subscribe to the Red Beans & Eric Newsletter so you don’t miss another recipe, interview, or who knows what else. And by signing up, I’ll send you a free e-cookbook that includes some of the most popular recipes that I’ve created for the website.

You can always stay in touch with me by leaving a comment in the section below, by clicking here or messaging me on any of the social media sites that I am on. Be sure to tag me if you make one of my recipes, I’d love to see the photo and your thoughts on it!