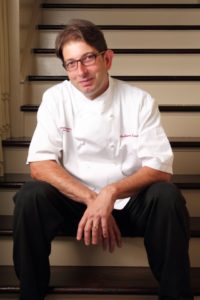 Anthony Scanio started out wanting to be an English teacher. But his love of New Orleans culture and cuisine guided him in a different direction. He enrolled in a college culinary arts program and began a career that took him from the Crescent City, through Italy, then back to the city he says he has a “love affair,” with.

Anthony has studied under James Beard award-winning chefs Donald Link and Stephen Stryjewski before finding a home with Emeril Lagasse at Emeril’s Delmonico. He started as a line cook in 2005, promoted to sous chef in 2006, then executive sous chef in 2009. Now, Anthony runs the kitchen and plenty of the behind the scene tasks that keep the restaurant one of the top food destinations in New Orleans as the Chef de Cuisine.

Emeril’s Delmonico is a Creole-inspired restaurant in the Lower Garden District. It bases its food on a fresh, clean, ingredient-based approach to cooking while keeping the Creole heritage the focal point.  As a life-long resident of New Orleans, Anthony has tapped into that knowledge of the traditional old world Creole dishes but has added new modern touches keeping the menu fresh and highly rated.   His love for New Orleans and Creole cooking shines through in his work and the customers of Delmonico love it! My house or Monday staff meals here at Delmonico. I can’t recall the last time I ordered red beans and rice out at a restaurant. Ironically, as a chef, I don’t get to eat out very often. As a kid growing up in Arabi, Popeye’s fried chicken was always accompanied by some red beans and rice. More than likely some dirty rice too! Nevertheless, red beans seem like one of those quintessential home-style Creole dishes best enjoyed at home amongst family and friends. You know, “Come on over, I got a pot of beans on.” Of course, there are exceptions. At Delmonico, we offer a variation where the beans and rice are cooked together congri style. Essentially it is our version of the congri oriental served in eastern Cuba or the rice and peas of Haiti. In fact, our New Orleans red beans and rice probably descended from these versions via the Saint Domingue diaspora of the early 19th century. We naturally serve our congri with a pork chop. New Orleans pork chop and red beans and rice with a twist!

Well, as I see it, if you’re using canned beans you ain’t making red beans. Now, on the other hand, at home, I’m not opposed to using frozen bags of pre-cut trinity or Creole seasoning as you’ll see it labeled at the grocery store. (I’ve also been known to use frozen pre-cut okra at home for a pot of gumbo.)

As far as seasoning meat is concerned the leftover ham bone is kind of legendary, almost mythical. I usually don’t have hambones lying around even if the flavor and creaminess they produce is indeed wonderful. Instead, I do like I learned from my mother and throw some smoked ham hocks into the pot. And like my Mama I enjoy the fatty bits off the hock the best! So we have our smoke and our fat but we still need some acidity, some vinegar. In short, I like to add some New Orleans style pickle meat to the pot as well. Finally, in addition to the usual seasonings such as thyme, bay leaf and cayenne I like to add a little, just a dash really, of allspice to the pot. Not enough to taste but enough so that you know there’s a little something going on there.

Any day of the week is fine although with my schedule Mondays and the occasional Sunday seem to be when I eat them. It is especially nice though to enjoy them on Mondays and participate in the time-honored rhythms of the city.

You can find Chef Anthony Scanio at Emeril’s Delmonico at 1300 St. Charles Avenue in New Orleans.  For restaurant information and a complete look at the menu, visit their website at www.EmerilsRestaurants.com/Emerils-Delmonico!